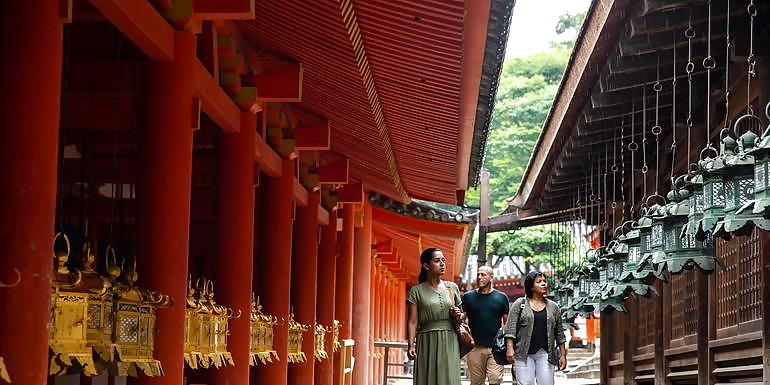 Arrive at any time.

Spend the day exploring vibrant Tokyo??one of the world's most populous cities??by public transit. Experience the traditional side of the Japanese capital on a visit to the Meiji Shrine, dedicated to Emperor Meiji and his wife; and take a stroll in Asakusa, the historic heart of Tokyo. We then get a glimpse of the city's quirky, modern side on a walk through Harajuku, a centre of Japanese pop culture and a great place to sit back and people watch. In Harajuka we catch a glimpse of the pop culture phenomenon of Kawaii. Directly translated as "cute," this Japanese cultural movement is reflected through various avenues of entertainment, toys, personal style, attitude, and cuisine.

This morning, we set out on a behind-the-scenes tour of the Toyosu Fish Market (formerly known as the Tsukiji Fish Market), the largest fish and seafood market in the world. Delve into the bustling maze of vendors with our expert local guides, learning about Japan's massive fishing industry, and round off the tour with a sushi-making class. Learn how to identify the freshest fish, prepare, fillet, and present; then enjoy a taste of your tasty creations. The afternoon is free to explore Tokyo on your own. Opt to visit Ueno park and the museums, Akihabara for cutting edge electronics, Harajuku for funky fashions, Ginza for the highest of the high end, walk the grounds of the Imperial Palace East Garden, or just stroll the streets, looking for the traditional life that still lies just under the modern surface.

Depart Tokyo by train. Disembark at Nagiso and continue to a local minshuku, a traditional Japanese bed-and-breakfast, where we'll spend the night. Enjoy a walk through the countryside, passing lush farms and rice paddies into Tsumago, a protected cultural area dating to the Edo period. Explore the charming town, where motorized vehicles are prohibited on the main street during the day and phone lines and power cables hidden from view to preserve its traditional feel. Back at our minshuku, feast on a kaiseki meal??a ritualistic multi-course dinner emphasizing artful presentation and fresh ingredients.

Continue by train to the historic city of Kanazawa, the seat of the powerful Maeda clan during the Edo period. Venture to Nagamachi, the city's well-preserved samurai district located at the foot of Kanazawa Castle, and learn about the lifestyle of Japan's ancient, elite warrior class. We'll also visit the Nomura residence, the beautifully restored home of a wealthy samurai family, boasting a collection of antique heirlooms and a stunning garden.

Spend the day exploring Kanazawa. Visit the Myoryuji Temple??commonly known as the Ninja Temple??which doubled as a military outpost, and discover its many hidden defenses and escape routes. Take a walk through the Higashi Chaya geisha district and gain insights into geisha culture, viewing one of the district's traditional wooden houses. Then visit a local craft studio, where we'll learn about the city's time-honoured crafts and learn to paint chopsticks with gold leaf.

Travel by bullet train to Hiroshima. Here, we'll pay a visit to the Peace Memorial Park and Museum, located in the heart of the city, which commemorates the tragic atomic bombings of 1945. Take your time to wander through the park, pausing at memorials dedicated to the victims of the attack, and visit the moving statue of Sadako Sasaki at the Children's Peace Monument, a reminder of the thousands of young lives lost as a result of the bombings. The large Peace Park in the centre of the city is an extremely moving place dotted with memorials of those known to have been killed in the explosion and others who died as a result. A burning flame waits in the park to be extinguished when all nuclear weapons in the world have been destroyed.

Catch a ferry to Itsukushima Island, popularly known as Miyajima. Here, you'll find one of Japan's most beautiful and sacred temples, the 12th-century Itsukushima Shinto shrine. This UNESCO World Heritage site is built over the water, with a red torii or wooden gateway that appears to float at high tide. Spend the afternoon at leisure and explore on your own.

This morning, visit the World Heritage-listed Himeji Castle, widely considered Japan's most spectacular and best-preserved castle. The castle was completed in the early 17th century and features an elegant white facade with multiple wooden roofs. Later, we hop on a train to Kyoto, which served as Japan's imperial capital for more than a thousand years. Explore the city's stunning temples, shrines, and gardens at leisure. This afternoon, take a guided stroll through the lantern-lined streets of Gion, Kyoto's renowned geisha district. As the Imperial capital, Kyoto is an essential part of any visit to Japan. Kyoto has some of the most magnificent temples in Japan which date back centuries. There are said to be 2,000 temples, shrines, palaces, museums and traditional gardens in Kyoto. Use your time to wander past huge wooden structures and multi-storied pagodas, all linked with famous walkways.

Venture to the breathtaking Fushimi Inari shrine just outside of Kyoto, dedicated to the Shinto god of rice. Walk under the temple's iconic red gates, where a scene from Memoirs of a Geisha was filmed. Spend the rest of the day discovering ancient Nara, the site of Japan's earliest capital. Visit the impressive Todaiji temple??home to the largest bronze Buddha statue in the world??and wander the walkways of Kasuga Taisha, one of Japan's most sacred Shinto shrines.

This morning, we visit a local temple to learn about the history and practice of Zen Buddhism in Japan. Meet with a local monk for a lesson in Zen meditation and calligraphy; then head to the shimmering Kinkakuji, or "temple of the golden pavilion," one of Kyoto's most magnificent sites. Later, we'll learn the basics of samurai etiquette and the practice of kembu, or traditional Japanese swordplay. Try your hand at this delicate art form, and witness a memorable performance by kembu masters.

Depart at any time.
Oversikt